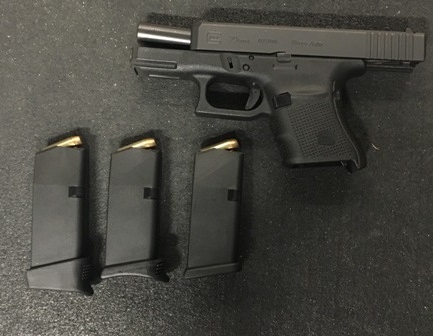 I am a proponent of carry the caliber that you can 1) easily carry, 2) want to practice with, and 3) can shoot reliably, accurately, and swiftly.  If the answer to those questions is a .22, then so be it. Too many people carry a caliber they are not particularly skilled with and often find unpleasant to shoot (resulting in that skill set not improving).  The majority (the FBI estimates it at over 90%) of civilian uses of a gun for self-defense involve nothing more than letting a criminal assailant know you are armed and willing to use it (not requiring the gun to be discharges).  So, in the vastly most like scenario of needing a gun, the gun’s caliber is irrelevant.  And if you have to use it?  An impressive caliber that you miss with under stress is of no use compared to a .22 that hits.  That said, I personally am large enough to easily conceal a larger gun and have practiced with and enjoy shooting 10mm (I can conceal it, I enjoy practicing with it, and I can shoot it reliably, accurately, and swiftly (near equally to smaller rounds such as the 9mm).

One of my competition guns (Major Sub in GSSF) and regular Inside the Waist Band (IWB) carries is the Glock 29 (G29) in 10mm.  I recently decided to put the various sized magazine extensions available for the G29 to a systematic test (looking at the subjective measure of how they felt (adding to grip length) and the objective measure on their impact on defensive accuracy (quick shots at relatively close range.

I started by warming up with the G29, drawing (Tulster holster) and shooting 1-3 rounds and then re-holstering at 5 yards (15 feet).

I then compared (16 rounds (2 magazines) at 7 yards -21 feet) the standard 10 round magazine, the 10-round magazine with the Pearce pinkie extension (+0), and the Pearce extended magazine plate (+2 rounds). Each single shot was taken on signal from holster (tracking speed and accuracy).  Comparing the three targets there was a similar pattern with each magazine option (and a little evidence of all right-handed shooters old friend, the down and to the left flyers).

As far as an objective measure; accuracy did not vary significantly (though technically in this sample I was most accurate with the stock magazines (also what I have shot the most with)).  There were also no overall speed differences (measured with a shot timer, staring holstered and measures from signal to round fired) between the three magazines.   Subjectively, I liked the feel of the two different extensions equally, though the +2s also added to capacity and had a slightly more substantial feel to them.  The downside for some would be the slightly larger profile to conceal.  Based on these comparisons, I have upgraded all my G29 magazines to the +2 extensions for both competition, practice, and carry.