Evolution; or How I became a “Glock Guy” Joel T. Nadler 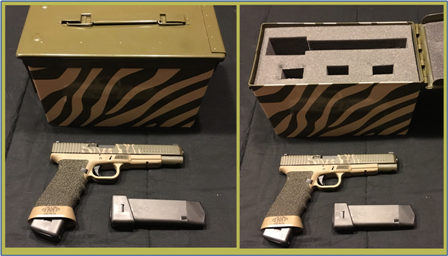 The first Glock I ever shot was a Gen 1 Glock 17 in the late 1980’2 and I absolutely hated it.  I disliked the look “ugly black brick,” I disliked the grip angle “the 1911 isn’t broke, don’t fix it,” I did not like the increased felt recoil “this is too light to be a good gun,” did not trust the internal safety “how can a plastic gun be safe?,” and, of course, being a 1911 guy HATED the trigger “Yuck!”

I honestly did not pick up another Glock until the 2000’s and though time and use had alleviated some of my issues, I still was not a fan.  My engagement with Glocks during this time was primarily as additions to my collection.  I buy guns for many reasons including “well I don’t have that one,” and “it is an iconic gun that should be in the collection.”  In 2015-16 I started training more and decided I wanted to get proficient with Glocks as they 1) where very reliable, 2) were the most consistent in form and function across models; more than any other company’s lines, and 3) in a apocalypse scenario would be literally everywhere for the taking and use.  I bought a Glock 17 Gen 4 in 2015 and practiced with it until I was proficient with it for defensive purposes (drawing, 2-3 rounds delivered quickly on target at 3-7 yards).  I got used to the grip angle (easier now as many of my guns had strayed from the 1911 angle), was OK with the trigger (again, other companies had got me used to striker fire triggers), I was used to other polymer guns so I no longer had issues with the recoil or safety, but I still thought it was ugly.

The Christmas of 2015 my wife bought me the limited-edition TMT Ted Nugent Glock 40 as my main present (have I mentioned how much I love my wife?)  Though I had joined Glocks social media site (Glock ID or GID: Think Facebook but just for Glock owners: http://id.glock.com/) earlier in 2016 (after buying a G41 Gen MOS if memory serves) I did not engage on the site in any real way.  A few days after getting the Glock 40, while the family napped in the daze between Christmas and New Years, I filled out the online registration for my new Glock and was asked if I had a GID user name.  I looked it up on GID, and as I was logged in with nothing to do, started looking around, found the forum, and started to interact, post, ask questions, and answer other’s question about Glocks and guns in general.

I was quite open in my original posts regarding my general love of firearms, training, instruction, self-defense, and collecting.  I was also quite open that, though I owned many Glocks, they were far from my favorite.  I had nothing against them, and appreciated their reliability and simplicity in take down and operation across all models, I was just not a ‘Glock Guy.”  Also, I had been collecting and training (primarily as a NRA Instructor) for decades and had become very comfortable with my skill sets, shooting, and ‘mindset.’  Though many factors have been involved in my shooting related experiences over the last 3 years, GID did help direct me towards the ‘Glock Side’ of my ‘shooting’ life.

Generally, through my interactions on GID, I started to not only appreciate the Glock as a firearm, but truly started to appreciate how unique the company was in supporting its customers.  Though some complain about GID’s function and lack of updates (it has hardly changed in 7 years), the fact it exists at all is a giant leap forward no other company has taken.  GID, Glock Sports Shooting Association (GSSF), Blue Label discounts, Team Glock, Armor and shooting courses open to civilians (if members of GSSF), all of these are programs when taken in total truly set Glock apart from all other companies.

GID also encouraged me to shake the dust off of my mindset to shooting.  I was a ‘teach a class a few times a year, take a class maybe every other year, and shoot 50-100 rounds 2-3 times a month (15-30’)’ person.  Through discussions on GID (and outside events) I started taking more classes, obtained more instructor certifications, started ramping up my longer distance shooting, started shooting weekly (sometimes daily), started instructing more (eventually becoming a senior instructor at Indy Arms), competing and running competitions.  Through Glock I started competing in GSSF Indoor and Outdoor competitions, organized and started running GSSF Indoor monthly leagues at Indy Arms in late 2016, became a Glock Armorer and Operator through their classes in Smyrna Georgia, was selected as a Glock brand Ambassador to the NRA’s Annual Meeting in 2018, have meet and made many friends at Glock, and have had articles and photos published in The Glock Report and the Glock Annual.

Again, not all of these changes are directly associated with Glock and GID but the difference in 3 years is massive and Glock and GID was a fairly large part.  In summary:

Pre-Christmas Glock 2015:  Had a solid defensive skill set, had not competed for about 20 years, owned many firearms, but only shot 2-3 times a month and usually just my carry gun (at the time an IWI Jericho in .45 and/or a 1911).  Really not teaching or shooting often at all.

Today, Christmas 2019, I Have multiple instructor/safety certification from USCCA, TTA, NRA, IDPA, instruct a class (from basic to advanced handgun, rifle, and shotgun) almost weekly, Serve as a Senior Instructor at Indy Arms.  Serve as match director on monthly GSSF Indoor and IDPA matches also at Indy Arms.  Have memberships at multiple outdoor ranges.  Shoot 2-3 times weekly and helped formed a shooting team competing regularly in GSSF Indoor (12 leagues this year) and Outdoor (6 this year) and IDPA (15 matches this year). Additionally, I have completed advanced classes at many of the major shooting academies in the US, have become a certified armor for multiple companies including Glock.  And finally, have started writing articles regularly for magazines such as Concealed Carry and The Glock Annual.

All of this because of one gun, Glock devotion to supporting their customers, and Glock ID.  So, I thought I would say thank you to Glock and to Glock ID.  Though I still enjoy, shoot, and collect other guns, I am now a “Glock Guy” and my main competition gun is my Glock 17, Gen 5.