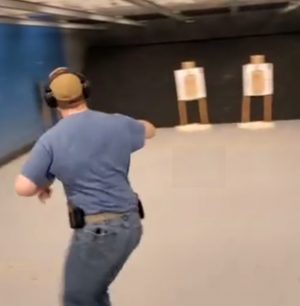 A very common question anyone will ask when wanting to improve a skill is ‘what should I be practicing?’ This can be a complex question and when it comes to firearms practice, the question is often more specific, ‘what drills should I be doing?’  Briefly, it is worthwhile to differentiate between practice (doing drills) and training (performing under observation and coaching).  The difficulty with many drills is that they can provide a final outcome measure (time or accuracy) of your skills and potential improvement, but without a training component (observation and coaching) may further ‘stamp in’ bad habits.  The expression most used to summarize this was by Vince Lombardi Jr., “Practice does not make perfect. Perfect practice makes perfect.”

Am I suggesting that practice without training has no value? absolutely not, but I am suggesting that any drill should be conducted slowly at first to ensure good form and fundamentals (grip, stance, sight alignment, trigger press).  Additionally, in the absence of coaching, drills should at least be videotaped allowing the individual to ‘self-coach.’  With these factors in mind I present one of the Indy Arms Shooting teams practice set of drills.  Note:  These are advanced drills involving movement, cover, and drawing from holster and may not be allowed or advisable at many ranges.  As with any drills ensure safety at all times.

Drill One: Speed from Holster.

This drill focuses on the safe and smooth presentation from holster and placement of a controlled pair or double tap on target.  Shooter should start 15’-21’ feet from a target aiming center mass with 3 magazines loaded to 11, 10 and 10 rounds (concealment holster and OWB magazine pouches).  On signal the shooter will draw and place two rounds center mass and then carefully ‘look’ the handgun back in the holster.  Repeat the drill through all 31 rounds (drawing and placing two rounds each signal) speed reloading as needed.  Coaching tips: 1) Make sure the fundamentals of the draw (trigger finger out of trigger guard until on target, initial solid dominant hand grip, proper placement of support hand) are not being compromised for speed, 2) Focus on defensive accuracy (fist to plate sized group center mass) and again make sure accuracy is not being compromised for speed, 3) remember there is no awards for speed re-holstering, take your time, and 4) maintain trigger and muzzle discipline at all times.   The goal is to build a smooth safe draw and shot placement and allow those movements to naturally become faster.

The shooter starts with their gun holstered and 2 magazines loaded with 4 rounds each.  Approximately 10’ in front of their starting point is a 3’ across cover wall.  Beyond the cover wall is 4 targets in a horizontal row labeled left to right A, B, A, B at 21’.  On signal the shooter approaches the cover while drawing their gun and from cover first rolls out to the left or right (shooters choice) and engages two targets (A targets from the left side, B targets from the right) with two center mass body shots each (slicing the pie: Shooting the targets in the order they would appear as rolling out from cover). Then as the shooter transitions to the other side under covert they speed reload and engages the remaining two targets with the same sequence.  This drill incorporates movement, shooting from cover, target differentiation, and slicing the pie.  Coaching tips; 1) ensure safety while drawing on the move (maintain fundamentals), 2) make sure to be balancing defensive accuracy with speed, and 3) make sure you are using the cover and slicing the pie as you engage the required targets.

Four points are defined in a zig-zag pattern approaching two side by side targets.  Each point is approximately 20’ from each other and 10’ closer to the targets.  The first point (starting point) is 45’ from the targets to the left, the second point 35’ from the targets, 20’ to the right, the third point 25’ from the targets, 20’ to the left and last point 15’ from the targets 20’ to the right again.  Shooter starts with 2 magazines (11 and 10 rounds) and on signal sprints from the first point to the second drawing their gun.  At the 2nd point they engage each target with 2 rounds center mass, then sprint to point three, again stopping and placing 2 rounds each center mass on both targets.  The final sprint is to point 4 where they place two rounds center mass on each target and then a single head shot to each (conducting a speed reload).  This drill focuses on movement (and safety while moving), transitioning from fast movement to defensive accuracy, multiple target engagement from different vantage points, and a speed reload.  Coaching tips include; 1) focusing on safely drawing on the move, 2) maintaining trigger and muzzle discipline while moving and reloading (finger only in the trigger guard while engaging targets and the muzzle always pointed safely down range), and 3) transitioning from rapid movement to shooting fundamental (not sacrificing defensive accuracy for speed).

These three drills (often done multiple times) are an example of the practice and training the Indy Shooting Team often works on in practice.  Drills are chosen that allow us to push our skills but still focus on safety and fundamental.